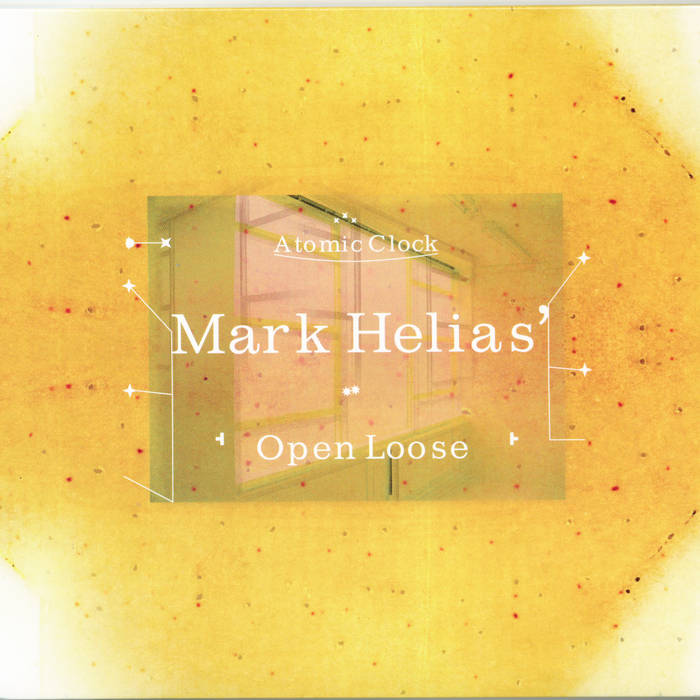 Legacy.....history we don't know,
THEY have been robbed, but haven't we all?
Mass outformation, media jolt, done by rote
Who is in the know, No, No Way to out the Know
Cinematic, symptomatic, dangle the carrot
Death by garrote, Hail to the Parrot,
Confounded Innocents Taken by Subway
Intelligents See Ya !!! Still in control,
What up at the Atomic Clock?
The second Chavez is pounding his chest
reveling in his unforeseen leverage
While the public narcotizes itself with Modern Scag

First things first: this relatively obscure disc is one of the best jazz recordings of 2006.

Mark Helias is one of the finest acoustic bass players in the contemporary jazz avant-garde, a guy who can play inside as well as out and who stretches the boundaries in both directions. In fact, calling him an "out" cat is too limiting and mildly inaccurate, as his groups tend to play a structured form of modern jazz that sits hard in the sweet spot of jazz tradition. It's just that Helias also loves to exploit the possibilities of freedom in his bands as well. Best of both worlds--melodic, harmonized and swinging, yet wide open too.

Helias's trio is called "Open Loose"--presently consisting of the leader on bass violin, Tony Malaby on tenor sax, and Tom Rainey on drums--and that's not a bad name. You could probably add "tight" in there as well, as the band plays with the kind of togetherness that only a working band can manage. There are only three of them, sure, and no chording instrument to hem things in too tight, but overall sound is one of casual discipline. On "Momentum Interrupted" the melody and bass line play in easy counterpoint until they lock into a perfect unison, for example, with Rainey on them like a mouse following peanut butter. Or there's "What Up" where the swing starts and stops on a microdot and you feel that the trio probably can finish each other's sentences.

But then this record is called Atomic Clock, so precision should not be a problem. What about the freedom thing? They have that covered too. Malaby is not a classic downtown wailer--he avoids the broad vibrato and emotive plainness of Coltrane or Ayler--but he goes outside the chords and the conservatory with wit and mastery. On "Chavez", for example, he overblows with remarkable control to get two tones at once, letting his intonation float free in carefully chosen spots. The opener, "Subway", gets more classically "free", with the tenor blurting and foghorning at will--air scratching through the mouthpiece, squeaks repeating like machine-gun fire, cleanly articulated passages tracing chord clusters rather than the usual neat patterns.

Rainey is one drummer you want if controlled freedom is your goal. Finding a clever middle ground between groove and coloration, Rainey never powers the group like a rock drummer. He sounds more like a multi-limbed percussion section that plays with uncanny togetherness, arraying cymbals and toms into a dialogue with bandmates. Most often Rainey is supreme when only Helias is soloing. The two rhythm players could easily make a duet record, as their portions of the disc fascinate.

It's fair criticism to note that saxophone trio records can get tedious--with not enough harmonic color (from a guitar or piano) to shade the tracks into contrast. Perhaps that's why Helias presents one quartet track in the middle of things: "Modern Scag" with Elery Eskelin making an appearance as a second tenor player. This is supreme news, with Eskelin playing late night counterpoint on the ensemble section, shadowing Malaby with relaxed suspense. It is difficult to tell when the musicians begin to improvise, as the slow and deliberate composition seems to slowly segue in and out of opportunities for freedom. There are no traditional "solos", yet little that you'll hear this year will sound more like "jazz".

It seems odd to recommend this record as one of the finest of the year, as it appeared so unimposingly. It was released only by Helias's own record label, and you can't seem to order if from anyone else or the other usual outlets. It will resist enjoyment if you merely put it on in the other room while you cook dinner or as background while you chat with a friend. It requires an active listening session--the kind of time too few of us have to spend any more. But its riches are undeniable. "Atomic Clock" is revealed as a collaged exercise in acoustic hip-hop, for example, and "Plantini" is plainly a kaleidoscope of patterns and rhythms that shifts continually and beautifully. "Zephyr" is a ballad that seems equal parts Ellington and Ornette Coleman--a combination that hardly anyone would even bother with.

But Open Loose is no ordinary band, and Atomic Clock is no ordinary jazz record. I'm strenuously enthusiastic about it, as will be all serious jazz fans. Almost "classical" in its organization and technique, this sequence of improvisations on tantalizing themes is a 2006 highlight that more people need to hear. Freedom with design, it sounds like the very definition of jazz--the very definition of America at its best.

PopMatters Picks: The Best Music of 2006

Jazz trios without chording instruments--here just Tony Malaby's tenor, Mark Helias's acoustic bass, and Tom Rainey's drums--risk being monotonous. The solution has often been the inclusion of one titanic soloist such as Sonny Rollins. Here, the answer lies in great writing--with intricate parts for all three musicians that never sound fussy--and magical interplay. Malaby is better than you've ever heard him before--sly, rowdy, quicksilver, depending on the tune's mood or the moment. Helias and Rainey--old partners who've conceived of 300 ways to swing and as many ways to play creatively free--are engaged in the kind of conversation that only takes place at 3:00AM between best friends. It's not dull. It's not exactly avant-garde yet it's definitely not mainstream. A great place to be.

CD Reviews from the July/August 2006 issue

All compositions by Mark Helias except Many Nows (Helias, Malaby, Rainey) published by Radio Legs Music BMI, All Rights Reserved.